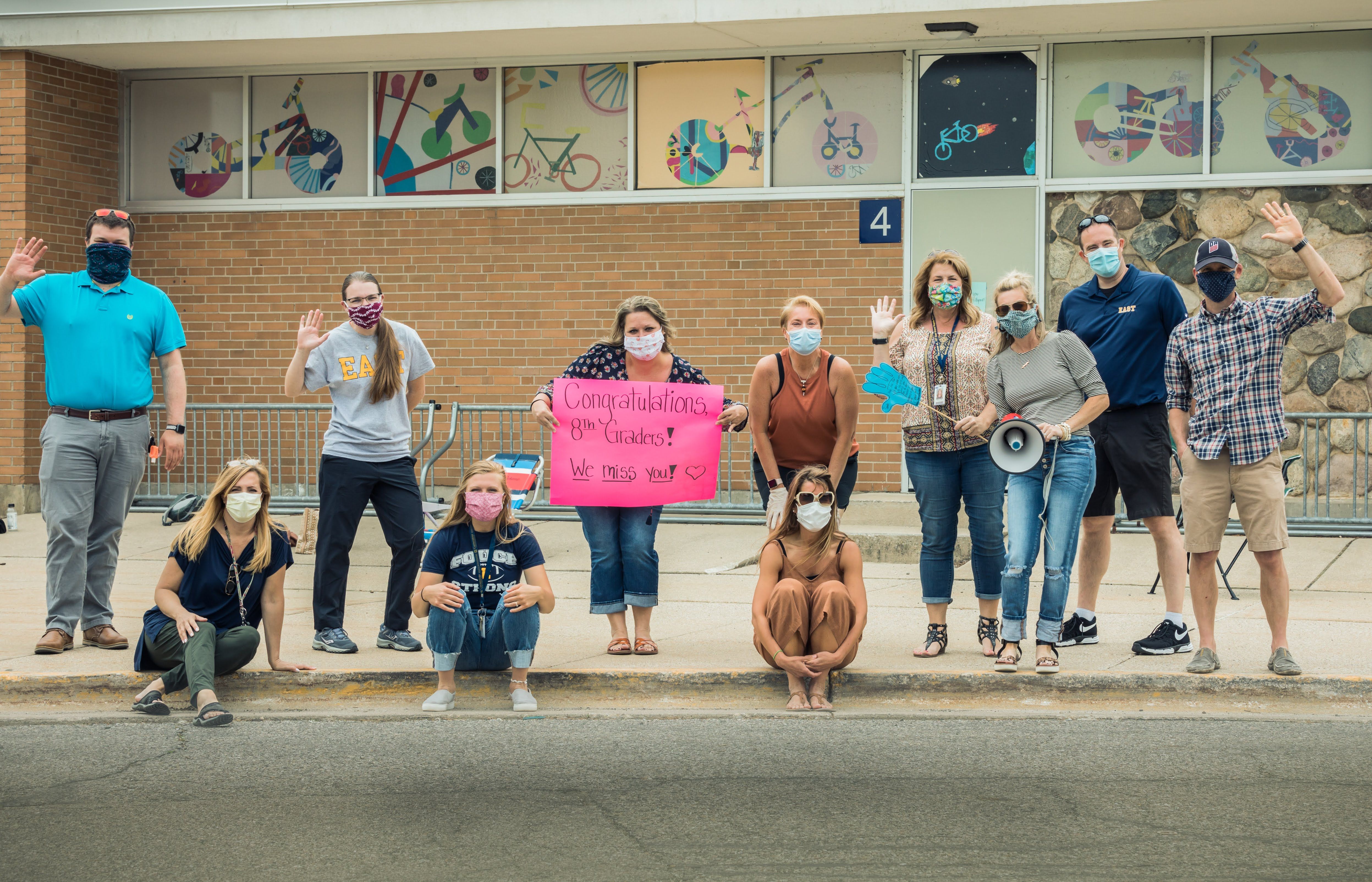 Thank You for Making One East an Incredible Success!

In 45 days this summer, One East raised more than $460,000 to help our schools make it through the budget crisis caused by COVID-19. Organized by the Foundation, One East brought together organizations like the EGR Community Foundation, PTO’s, teams, families and booster groups.

Together, we were able to average more than $10,000 a day in donations, all without being able to gather for a party or a committee meeting. Because state and federal funding is still uncertain, we still don’t know the specific target for the amount of money needed. But, when the story of how our community rallied to make it through this pandemic is written, one chapter will read that when our schools told us they needed our help, we answered their call.

One East is only one part of the support the Foundation will give to our schools this year. Thanks to our donors and the strong base of the Foundation’s endowment, the Foundation will be able to contribute an additional $334,000 to our schools this school year to fund vital programs. We’re also funding more than $24,000 in professional development for our teachers, and we provided $54,000 to the district to purchase state of the art robotic air sanitizing machines to help make the return to school safer. Together with the $462,000 raised through One East, that means the Foundation and its supporters will provide our schools with more than $870,000 this school year.

Online donations have stopped, but if you still want to donate to One East, you can do so by mailing a check made out to "EGRSF" to 2915 Hall Street SE, Grand Rapids, Michigan 49506.

Thank you, to all of you from all of us!

Why do our schools need this money?
Because of Covid-19, our schools are facing an extraordinary budget crisis. More than 60 percent of school funding comes from state sales and income taxes, not our local property taxes. Projections show reduced state revenue because of Covid-19 may create a deficit of $2.85 million for East Grand Rapids Public Schools, far greater than deficits during the Great Recession.

What is the Foundation doing to help?
This year, thanks to our donors, the Foundation will contribute more than $330,000 to our schools to support vital programs. Thanks to our the recent Now&Forever campaign, our endowment--once all pledges have been collected and our grant calculations have been adjusted based on the endowment's growth--willl soon generate half a million dollars for our schools every year. That means that from a student’s time in East schools from kindergarten through graduation, the Foundation will contribute more than $6.5 million to their education. And that funding will continue for generations to come.

The Foundation also organized One East, a community-wide fundraising effort to help the district make it through the current budget crisis. In its first two weeks, One East raised almost $200,000. Every dollar of that money will go to our schools to help lessen the severity of the cuts, keep our school district solvent, and eliminate the possibility that the state will take over the operation of our schools.

Also, at the outset of the pandemic, the Foundation granted money to the district to purchase state of the art robotic cleaning machines from a local company. The two machines, which were immediately used to disinfect all school buildings including district offices and our child care facilities, sell for more than $300,000. The district also loaned the machines to our public safety department to keep our first responders safe. The machines are being used now as staff return to school buildings and they will be an integral part of the district’s plans for a safe return to school for our students.

Taken together, these three initiatives total more than $830,000 in value that the Foundation is providing for our schools this year. The continued success of One East will only make that total grow.

How will One East help?
An unprecedented challenge demands an unprecedented response. The Foundation is organizing One East, a community-wide, coordinated fundraising effort so every dollar raised by school entities this summer supports programs in our district that are in danger of being cut. One East is bringing together organizations, students and families at all our schools to protect the East Grand Rapids Public Schools’ Tradition of Excellence. That means every dollar raised will go directly to our schools.

Who is contributing to One East?
The first $200,000 was contributed by only about 200 donors. While it's wonderful to see the generosity of donors contributing $1,000 on average, many more people in our community will need to donate if One East is to reach its goals. Interestingly, a great many of the early donations to One East have come from people whose children have finished their time at East or people who have never had children in East schools but who understand that our schools are at the heart of our community. Not very many of our early donations have come from parents with children currently in East schools, which is surprising since they are the families who will be most directly impacted by the cuts under consideration. How well our schools are able to make it through this crisis will be determined, in part, by how successful One East is. We know we love gym class, orchestra, the Spanish program, elementary paraeducators, athletics, and neighborhood-based elementary schools.This is our opportunity to protect our schools. It's up to all of us.

What is the suggested donation?
Every dollar donated to One East will go directly to our schools so any contribution is meaningful. We're trying to raise $653 per student in our district, to offset the $653 cut in per pupil state funding. For families with children in East schools, we're asking for a donation of $653 for each child. We know not every family can afford to do that, however, so we'll also need community members to sponsor students by making a $653 donation and we'll need others to make even larger contributions--$15,000 to sponsor an entire classroom, for instance. It's a big ask, but it's a huge challenge our schools are facing. Some people in East are calling for a "voluntary tuition" that families would be expected to pay every year. We're hoping our community's clear and consistent love for our schools will make obligations like that unnecessary. Do families have to donate to One East? No. One East isn't mandatory. It's an opportunity, an opportunity to save our schools.

Why can’t the Foundation use the funds in its endowment to cover the shortfall?
That’s not what the endowment was created to do, and that’s not what donors to the Now&Forever endowment campaign intended. The current board did make an aggressive decision to approve a 20% increase in the amount allowable for this year because of COVID. Thanks to its donors, the Foundation will provide more than $330,000 to our schools this year.  This is not a practice that can be used annually while still being prudent fiduciaries of the funds that were donated to the endowment over the last 30 years and by the 900 families and staff who support the most recent campaign. Although we "finished" the campaign, many of the 900 families and staff who supported this effort made pledges over a three-year period. A good portion of these funds have not been collected to date and therefore are not part of the calculation that can be drawn upon. When all donors have completed the pledge, the endowment will generate half a million dollars for our schools every year for many, many years to come. Over the course of students’ years at East, the endowment will provide more than $6.5 million for their education.

What’s the timeline for One East?
This is urgent. Our deadline is the end of this month. Beginning with the Board of Education’s budget meeting June 15, we have only 45 days to raise money to protect vital school programs before the district has to present a balanced budget at the end of July. That means the funds One East is able to raise to protect school programs and help preserve the district’s fund balance will have to be collected by July 31.

Will One East bring back programs that are on the list of recommended cuts?
That’s the goal, but that will require the campaign to be incredibly successful. The district has already recommended $1.25 million in cuts, which would still require using another $1.6 million in the district’s fund balance to offset the shortfall of $2.85 million. Using that much of the fund balance would drop the district below the state-required 5% fund balance threshold, meaning we could lose local control of our schools. Yes, this is that serious. At its June 15 budget meeting the Board of Education asked the district to come up with additional cuts to keep that from happening. It’s possible that the state or federal government will provide more funding for our schools, but no one knows when or if that will happen. One East is an opportunity for our community to save our schools from this dire situation. If we’re able to meet our extremely ambitious fundraising goal of $2.85 million, cuts will be prevented. It’s up to us.