A Virtual Cup of Coffee with Jim MacDonald '81 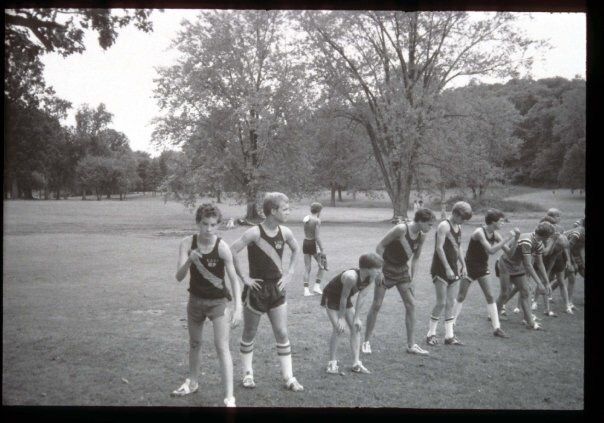 Dr. Jim MacDonald, '81, is a Children's Sports Medicine physician at Nationwide Hospital and an Associate Professor in the Department of Pediatrics and Family Medicine at The Ohio State University College of Medicine (relax, he's still a Michigan fan). He has degrees from Harvard undergrad and Harvard medical school, completed his residency at Maine-Dartmouth Hospital and completed a fellowship in sports medicine at Boston Children's Hospital. But if you ask him (and we did), it's what he learned at East Grand Rapids High School that made all that possible.

You can only have one: Rose’s caramel corn, an ice cream cone from Jersey Junction, or a Yesterdog. Which do you choose?
Yesterdog for sure. It’s just that I’ve become a vegetarian in my adult life – my high school self would have ordered the Cheddardog, but I’d order up a Veggie Dog today.

What was your path from East Grand Rapids to where you are now in life?
I went to Harvard, where I majored in Biology and was pre-med. As I approached graduation, I realized I wasn’t ready for the rigors of medical school, and so I entered the Peace Corps. I spent three years in Swaziland, a small country in southern Africa. When I returned, I went to Harvard Medical School, did my medical training in Maine, and then began a career in Family Medicine in California. Over time, and with some further medical training, I narrowed my scope of practice to the care of athletes. Now, I am a specialist in ‘pediatric sports medicine,’ and an Associate Professor at Ohio State University.

What specific thing did you learn in East that has enabled you to be successful?
That would be how to write well. I credit Bert Froysland (EGR English teacher) for helping me acquire that skill. The classes I took with him were demanding and they prepared me so well for the various challenges I would face over time, from college expository writing to my current position as an editor for a medical journal. I am amazed at how many of my peers in the medical field struggle with writing. I owe a debt of gratitude to Mr. Froysland for this gift.

What were you like in school?
I’m not sure how to answer this! I think friends in my class of ’81, like Tom Nachtegall, Case Krell or Jeff Manning might do a better job with this question.

Now I am cheating, as this is answering a different sort of question, but I do know that I loved EGR High School. My four years were exceptionally formative. I was exposed to some very intelligent classmates and had the great fortune of having some of the best teachers one could ask for.

I hope that school pride came through during the time I spent at East. I hope that was ‘what I was like’ in school.

Did you have a favorite teacher or class?
Aha! The perfect question to pose after my previous answer.

I had so many – may I list as many as I can? Mr. Norman (Latin), Mrs. Smalligan (English, Latin), Mrs. Cullen and Mr. Howard (Freshman Humanities), Mr. Alguire (Calculus), Mr. Zimelis (Chemistry), Mr. Wisz (Physics), Mr. Froysland (English). The teachers I had at East are among the finest I have had anywhere I’ve found myself. They thoroughly prepared me for the rigors of Harvard.

If you had to choose one moment in one location to serve as the signature moment of your East school experience, what would it be?
The second time I ran the two mile as a freshman in HS, I popped off a 10:09 and almost won the invitational meet I was running. I didn’t know I had that in me. It was the beginning of a running career that took me through high school and college.

What do you know now that you wish you’d known then?
That life can seem both long and short. That it can give tremendous pain as well as joy.

It’s hard for me to fathom that it’s been 35+ years since I graduated from East. It does not seem nearly so long ago. If I add 35 years to my current age -- well, that will take me almost to 90, an age I don’t necessarily expect to see.

Middle age is a funny time. I can reflect both on the great joy of having children, and the great pain of having lost a sibling with whom I grew up.

Do you stay in touch with many people from East Grand Rapids?
Oh yes! I have stayed close with several people. I have mentioned Tom Nachtegall, my oldest and dearest friend, and someone I see almost every time I return to EGR to see my folks. I’ve travelled in Thailand with Case Krell, and seen Jeff Manning in London. Before injuries caught up with me, I used to run with Mark Creswell around Reeds Lake when I’d come home. With the advent of email and Facebook, the list of people with whom I’ve stayed in touch has only grown.

I haven’t made every reunion, but I did make the tail end of our 35th (last year at the Yacht Club), and it was a blast seeing people like Jimmy Coretti, Bob Hotchkiss, Bill Spindle and so many more. Suzanne Wickman and the reunion organizing committee have been tremendous at tracking people down over the years.

What advice do you have for young East alums who are just starting out?
You have graduated from one of the very best public schools in the United States. Don’t take it for granted. Value and support public education, wherever you end up. It is one of our country’s great treasures, and absolutely fundamental to the proper functioning of our republic.

Who else would you like us to have a virtual cup of coffee with?
John Ronan (’81)

Bonus question: What are you glad we didn’t ask you about?
How I can stand living in Columbus, home of the Buckeyes [answer: the job is great, my family is very happy – I still root for Michigan. Go Blue!!!]