A Virtual Cup of Coffee with Flip Goodspeed '79 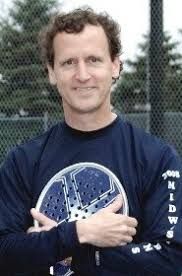 Flip Goodspeed is, to our knowledge, the only member of the Class of 1979 to have been mentioned on The Daily Show by Stephen Colbert. You can see the clip at http://www.cc.com/video-clips/sh032m/the-daily-show-with-jon-stewart-daily-colbert---platform-tennis. But there's more to Flip than that. He was inducted into the Platform Tennis Hall of Fame in 2008 after winning eight national doubles titles, including five in a row. He's also a successful businessman and the father of two recent East alums, Liza and Jane.

You can only have one: Rose’s caramel corn, an ice cream cone from Jersey Junction, or a Yesterdog. Which do you choose?
All are great options, but I would say it depends on time of day or night :)

What was your path from East Grand Rapids to where you are now in life?
I have spent 52 years living in EGR, 18 years prior to college and 34 years post college. Four years at Denison University in Ohio. After graduating from Denison I moved back home to help my father run the family bowling and restaurant business. I did this for 3 years until we sold the business. In 1986 I jumped into the world of steel as a sales representative. In 1998 I started my own rep business, Goodspeed Metals Group.

What specific thing did you learn in East that has enabled you to be successful?
The will to learn and compete both in life and athletics.

What were you like in school?
Quiet and very active.

You’re a very accomplished athlete. Platform Tennis Hall of Fame, course record at Kent Country Club, etc. How did your East experience prepare you for that?
I grew up in a family of 4 boys in an amazing neighborhood. We were very competitive and active. My parents who were athletes encouraged us to play any or all sports we wanted. Basically, all EGR leagues so no traveling. As I progressed through school there was always strong competition and great coaching that continued my drive to compete at all levels. This continued in college where I played tennis.

Did you have a favorite teacher or class?
Hard to pick a favorite.

If you had to choose one moment in one location to serve as the signature moment of your East school experience, what would it be?
My decision to attend Denison which gave me the interest to keep learning and communicating with people.

What do you know now that you wish you’d known then?
I really wish I would have taken the opportunity to travel during and after college.

Do you stay in touch with many people from East Grand Rapids?
There are a fair amount of friends who live in GR. I also continue to connect with friends outside of East.

What advice do you have for young East alums who are just starting out?
Be open minded, be honest and work hard. Only good things will happen.

Who else would you like us to have a virtual cup of coffee with?
My grandfather Goodspeed who died early on in my life.