A Virtual Cup of Coffee with Dave Berles '55 and His Son, Jim Berles '88 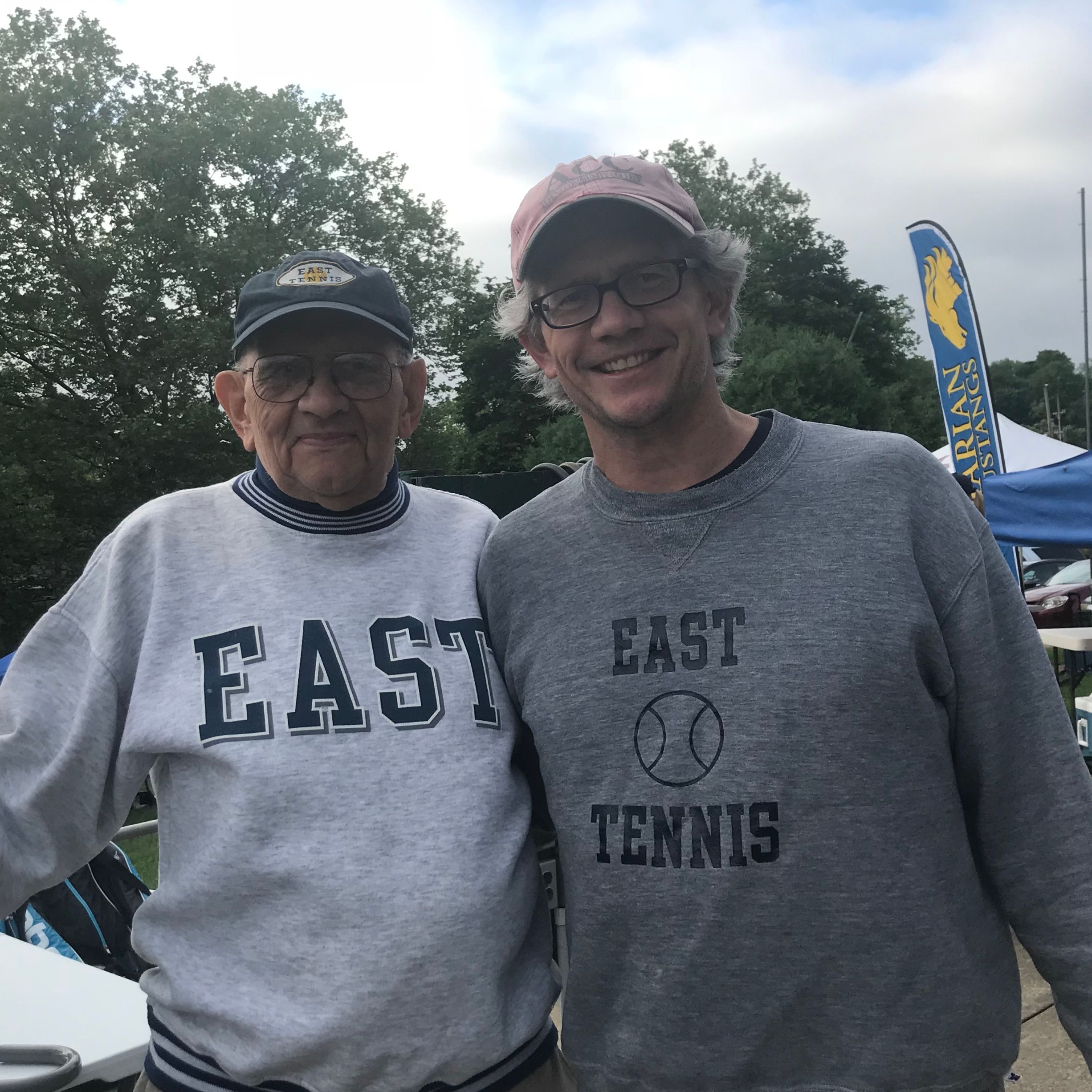 Dave Berles ‘55 worked for Kentwood Public Schools for more than 40 years as a teacher, counselor and coach. He was named Michigan High School Tennis Coach of the Year in 1980, West Michigan Counselor of the Year in 1988, and was elected to the Michigan High School Tennis Coaches Hall of Fame in 1994. Twenty-one of his former players went on to play tennis in college. The annual tennis tournament at Bay View in northern Michigan is named in his honor. He’s been married to Mary Kay (Page) Berles for more than 58 years. They have two children, Kathy (Berles) Duisterhof ‘84 and Jim ‘88. Dave and Mary Kay have four granddaughters.

Jim Berles ‘88 works for Alpena Community College as an instructor of engineering, math and GIS mapping. He spends his summers in Bay View, MI where he met and married his wife, Kristin, of 21 years. They have one child, Amelia (16), and two cats. Jim’s hobbies include tennis, Pickleball, coaching girls tennis at Alpena High School, serving on the board at Thunder Bay Theatre, and mapping anything! Jim periodically makes it back to EGR to visit his parents, sister and extended family.

What was your path from East Grand Rapids to where you are now in life?
Dave ‘55: I graduated in 1955. We had about 92 in our class, the last class under 100. I wanted to go to MSU but my dad could not help me. I attended Grand Rapids Junior College for two years for less than $1,000 a year. I played tennis two years, winning the Junior College Championship. I joined the National Guard in 1955. I worked for the city of East Grand Rapids, helped a builder put in basement walls. I worked for the Kent County Road Commission, taking bumps out of the highway. I attended MSU from 1957-60. I was a member of Phi Delta Theta fraternity and played two years of tennis. I dated my wife in 11th and 12 grades and all four years of college. I worked for Kentwood Public Schools for forty years, as a sixth grade teacher, middle school counselor, guidance director, night school principal, tennis coach, and ran college visits. My wife, Mary Kay, worked more than forty years for Kentwood, East Grand Rapids, Mayflower, and Martin Luther King schools.
Jim ‘88: A long path! After graduating in 1988 I followed my Uncle Jim Page’s (EGR 1962) career path and attended Michigan State University to study civil engineering. After graduating from Purdue University with a Master’s Degree in geotechnical engineering, I worked for two engineering firms in West Michigan and became a licensed engineer. Abruptly, I decided I wanted to teach. My wife Kristin and I moved to Hancock, Michigan so I could complete Michigan Tech’s secondary education program. I was very fortunate when my wife found an opening at Alpena Community College. I was hired in 2001 as an engineering/mathematics instructor. 19 years later, a house and a 16 year-old daughter, we feel that Alpena, Michigan is truly our home. I have since gained skills in GIS (Geographic Information Systems) and love to make maps and teach map making and spatial data analysis. This past summer I spent a month mapping ancient shorelines of Minoan archeological sites on Crete.

What specific thing did you learn in East that has enabled you to be successful?
Dave ‘55: EGR is a top five public school in the state. I had great teachers. In second grade I had my father in law’s sister. Very unusual. Some great teachers were Reed Waterman, Margaret Postmus, Mel Buschman, Carl Schiller, Bob Porter, Boss Scharmack, Ma DeJonge. EGR stressed the importance of a good education, and also encouraged us to go to college. I think all 92 of us started college. We had a great class. We had only one marriage in our class.
Jim ‘88: Drafting and visualization skills with Mr. Benson (Middle School), Mr. Graham and Mr. Zyskowski (High school). I signed up for every drafting class I could take. When I entered the engineering profession, I felt like I had an advantage over many other engineers due to my sketching ability and visualization skills. I continue to use these skills every day.

What were you like in school?
Dave ‘55: I was an athlete. I played three sports--football, basketball and tennis. Got to state finals in tennis in 10th and 11th grades. I was friendly. Boys were always at my house. It was the meeting place. I was involved with lots of other activities too.
Jim ‘88: I was an over-studious introvert that was comfortable talking with everyone but not in front of a large crowd. I played a lot of tennis, listened to alternative music, enjoyed reading “1984” in 1984, and going to high school dances.

Did you have a favorite teacher or class?
Dave ‘55: Margaret Postmus was a counselor for all four of my years. Reed Waterman, who taught PE and was the AD. Mel Buschman, the principal who left for MSU.
Jim ‘88: There were so many wonderful teachers – so difficult to pick one! I guess Mr. Bardo (Middle School Geography) ranks up there with the best of them. He made us free-hand sketch a map of the world and label countries, seas, etc… I think I still have the map somewhere in storage. Map making has become my favorite hobby, so I think I owe it all to Mr. Bardo.

If you had to choose one moment in one location to serve as the signature moment of your East school experience, what would it be?
Dave ‘55: It wasn’t when I was in high school but my heart stopped twice in the fall of 1987. I had two Aero Med rides to University of Michigan Hospital. I returned to work in March. I was in tears that spring when my son Jim graduated, not knowing if I would be at graduation. Jim and Mary Kay saved my life twice. Jim was at tennis finals the day of his graduation. He barely made it back in time for the ceremony. They pulled in just as the graduates were lining up to go in.
Jim ‘88: Graduation. My father had been ill for much of my senior year. I spent a lot of time on my own while he was at UofM Hospital. Having him fully recover and attend my graduation ceremony was very special.

What do you know now that you wish you’d known then?
Dave ‘55: I wish I had more career information. I thought I was going into the insurance business with my dad. I switched to education when I went to MSU. One of the counselor’s jobs at Kentwood was teaching career education. I believe students need a lot of help studying careers, talking to people in different careers, and visiting where they work.
Jim ‘88: Use your time wisely to gain lifelong skills! Vocal and instrumental music instruction would have been “free” in high school! How many times I have wished as an adult that I could actually sing or read music.

Do you stay in touch with many people from East Grand Rapids?
Dave ‘55: I stay in touch with players on the tennis team. Glen Young, George Hitler, Dave Leavenworth, and Ren Brander. I hear from many at Christmas. I am looking forward to Reunion #65.
Jim ‘88: Facebook makes it easy to stay connected, but sadly I wish I had worked much harder to maintain some of my high school friendships. The class of 1988’s 30 year reunion last fall made me realize how many classmates I really miss.

What advice do you have for young East alums who are just starting out?
Dave ‘55: I recommend you apply yourself in high school. Study hard, be a good citizen, be active in different activities, student government, music, debate, sports, and work part time. I worked in junior high. I had a Grand Rapids Herald route. I worked every summer. I think it all helped me in college and in my career.
Jim ‘88: Whatever career path you choose, make sure you are really passionate about your choice. It may take many years to find your true calling. Job shadow as much as possible!

Who else would you like us to have a virtual cup of coffee with?
Dave ‘55: I would love to share a cup of coffee with graduates from my class that live around the U.S. I hope everyone returns for our 65th reunion. I really look forward to class reunions.
Jim ‘88: Chris Frick, Bill Hodkowski, Andrew Pillsbury, Barb Bergstrom, Cathy Oetting, Pam Foster, and Tim Howell

Bonus question: What are you glad we didn’t ask you about?
Dave ‘55: My academic record.
Jim ‘88: The time that my friends and I signed up for ballroom dance classes in 8th grade because we looked at the signup sheet and the first 25 names were girls.

Extra information from Dave:
I have lived in EGR all my life. I’ve lived in four different locations. On Argentina, San Jose, Kenesaw, and Floral. Kind of unusual.