A Virtual Cup of Coffee with Amy (Aves) Challenger 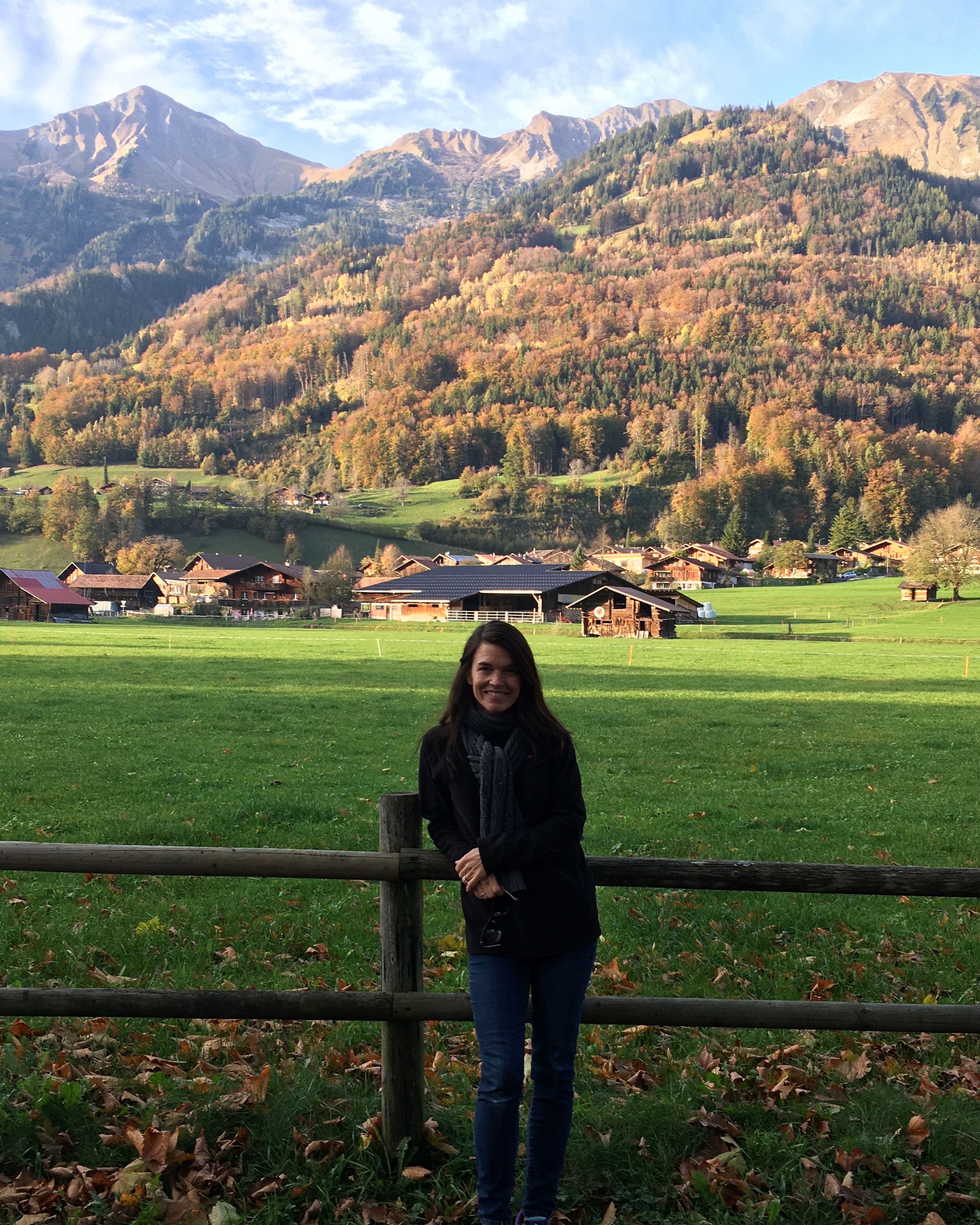 A Virtual Cup of Coffee with Amy (Aves) Challenger ‘88

Amy Aves Challenger is a writer, artist and U.S. expat living in Zurich, Switzerland who spends a lot of time in refugee camps, learning from courageous humans. Her writing has appeared in Huffington Post, Washington Post, Brain Child Magazine, Poets Reading the News and several other publications. She's writing a novel about the journey of an atypical boy miscalculated and misunderstood from conception, and how he, his mother, and family are forced to find what is true about existence, about fighting to flourish as an unpredictable, undefinable human. After reading her interview, you can learn more about Amy at https://www.amyaveschallenger.com/

You can only have one: Rose’s caramel corn, an ice cream cone from Jersey Junction, or a Yesterdog. Which do you choose?
That's easy. I can’t eat gluten or dairy anymore (I have Lyme Disease) and don’t eat meat so I’d love a serving of that buttery sweet Rose's caramel corn (okay, I can have a bit of butter). I insist on visiting Rose’s every time I return to EGR. When we visit, my husband Lynn teases me for repeating the story of sitting on a stool at Rose's screened porch bar, eating caramel corn and drinking root beer, while Mr. Rose flipped pancakes and chatted with my grandmother, Nana. My kids like the root beer part of the story because they drink loads of it when back in the States; root beer is rare in Switzerland.

What was your path from East Grand Rapids to where you are now in life?
I sort of rebelled against my beautiful hometown, as I was always, inwardly, that type. My route to where I am now involves graphic and product design, art direction, illustration and writing in New York, Chicago, San Francisco, New York again, California again, Connecticut and finally Switzerland. I met Lynn in California after almost marrying the wrong man. Thank God for hard lessons. When we met, Lynn and I shared a love for adventuring to new places, riding our mountain bikes into unknown forests, poking our noses where we hadn't been before, and discussing the world's messes. We married on Valentine’s day in Naples, Florida. A year later, I became pregnant and eventually we had three kids (two boys and a girl) in under three years. Our oldest has special needs, so I've spent the last fourteen years advocating for him, and eventually other misunderstood special needs kids and European refugees.

What specific thing did you learn in East that has enabled you to be successful?
My English education at East was far better than any college courses I’ve taken. My East teachers fostered my ability to communicate pretty well. I owe my sense for the rhythm and song in a sentence to Mrs. Mitchel. I credit my acceptable knowledge of grammar (and my odd joy for editing other people’s writing) to Mr. Froysland. My appreciation for vocabulary is surely because of Mrs. Graham. All three voices still chirp or scold inside of me somewhere, along with my dad, who told me that if I learned nothing else for my future, I must learn to communicate. My mom (Mrs. Aves) accepted a job teaching art at East High while I was still developing my artistic confidence in Mrs. Pollice's class. It was awesome to create and learn down the hall from my mom, an obvious influencer of mine, for a couple of years.

What were you like in school?
Honestly, I was more shy than I am now and more insecure. I played average tennis, ran middle-distance track, tutored kids in an underprivileged neighborhood across town, candy-striped at a colorless long-term care facility talking to people in various stages of dementia or in comas. I worked at Dancer’s Corner, then Crazy Larry’s, then my dad’s advertising agency attached to the Amway Hotel. I befriended lots of kids casually but wandered everywhere with my closest friends, Chris [Holden] and Jenny [Lindsay].

Did you have a favorite teacher or class?
I already gushed about my three favorite English teachers above. If I picked one favorite, it wouldn't be fair to pick Mr. Froysland because he often reminded me loudly that he taught my dad English in the very old days but didn't like my trouble-making dad, at all. (We snickered about this at home.) Mrs. Mitchell would probably win over Mrs. Graham only because she giggled and grinned and used her arms a lot, sort of like windmills catching and slinging words. She liked to act silly and I could relate to her. But also I did like Mrs. Graham's picture of Magnum P.I. attached to her desk. She called him her big crush. I appreciated her candor.

If you had to choose one moment in one location to serve as the signature moment of your East school experience, what would it be?
Well that would have to be the time I felt so nervous (because I had a crush on a boy in the audience) while giving an oral presentation, with props, on American Colonial life in Mrs. Belfer's middle school social studies class...that my jittering hand poured apple cider all over a classmate's chest instead of into her cup. I remember her globular brown eyes and gasp. I remember Mrs. Belfer's louder gasp. Then, while scampering in front of the class to collect a paper towel and salvage the girl's shirt, I tripped on top of another classmate John's elaborate paper mache toothpick-fenced fort structure, destroying it. After that, I think I ran to the bathroom.

What do you know now that you wish you’d known then?
I wish I’d better grasped how my privileged EGR childhood and summers on Lake Michigan armed me for action. How would I help protect beaches, lakes, and clean air? How would I pursue justice and education for other kids, early on? I had a dream of entering the Peace Corps, but was afraid to follow it. I figured I wasn't strong enough, and that people of other cultures would endanger a sheltered, freckle-faced girl. Plus, I was especially worried that as a volunteer, I wouldn't thrive without a financially lucrative life. I was driven, but I wish I’d considered then what I was driving for. Also, I wish I'd known how to take hold of my rebellious nature, accepting it early in life rather than sort of bottling it. I wish I'd understood that as a girl, my first goals needed not have been dominated by my likability, particularly to men. One can't please everybody while focusing on higher purposes, setting limits, debating, and insisting on change.

Do you stay in touch with many people from East Grand Rapids?
I'm sorry to say that my strength is not in communicating with old friends. I do talk to Jenny and Chris occasionally, and a handful of other classmates online (thanks to Facebook.) I'm always thrilled to have visitors in Switzerland and to see people when I return to the Midwest. But I tend to live in the present, within the context of the people and environment around me. This can be a good habit, but also has its disadvantages.

What advice do you have for young East alums who are just starting out?
First, don't take advice, but ask for ideas, listen, then follow your gut. Seriously. Find what's good in you, what you have to offer, what you know; grow that, follow it. Don't fear too much like I did along the way. Failure and adversity are bridges to growth. Second, ask questions like an American. Raising your hand and speaking or writing or posing the "why" is often discouraged where I reside in Switzerland. But as our child was suffering with depression after West and East Coast U.S. schools hadn't met his needs, my husband and I asked, ‘Why? Why are we limiting our scope? Where else might we go, to see him and our family flourish?’ We eventually moved to the least obvious place — the German-speaking part of Switzerland, known for order and categorization. But there we found unusual administrators, much like the leaders of EGR High, at an international IB school in Zurich. They were willing to inquire beyond the typical child, to consider our fifth-grade boy as a human ‘why.’ Mr. Crocker, the principal, believed in pursuing our son's answers, his potential.

Today I ask myself often, Why am I here? What should I do next? The answers aren't always easy, but they eventually come, when I ask.

Who else would you like us to have a virtual cup of coffee with?
1) Kerry Eleveld if you haven't already
2) Christine Miller Kelly
3) Christine Dauenhauer (formerly Christine Holden)

Bonus question: What are you glad we didn’t ask you about?
TRUMP