A Virtual Cup of Coffee with Luke Glendening ‘07 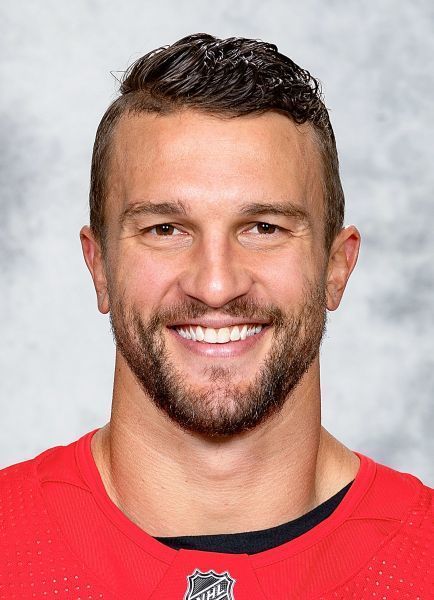 Luke Glendening ‘07 has played more than 500 National Hockey League games, all for the Detroit Red Wings until he signed with the Dallas Stars for the 2021-22 season. He’s considered one of the best faceoff men in the league, as well as an excellent penalty killer and defensive forward. In the years since the NHL went to a seven-round entry draft, Glendening is the only undrafted player to have played more than 500 games for the Red Wings.

You can only have one: Rose’s caramel corn, an ice cream cone from Jersey Junction, or a Yesterdog. Which do you choose?
That’s a tough one because when I’m home, I go to Rose’s for dinner with my parents and then we go to Jersey and get an ice cream cone, so I get both. And then when I’m not here, what I crave is a Yesterdog. So I guess I’d say all three.

What was your path from East Grand Rapids to where you are now in life?
I went to Hotchkiss prep school after high school because I wanted to have one more year playing three sports so I could try to play one in college. The other option for hockey players is to play juniors but if you put everything in that basket and the basket breaks, you’re not holding much. I played a whole football season at Hotchkiss and didn’t get any interest. Then I was down to my last game of the hockey season there and I hadn’t had any interest from colleges. Whenever people ask me who my favorite NHL player is, I always say Max Pacioretty because when Max left Michigan after his freshman year to go pro, that meant Michigan had a spot on their team. A Michigan coach came to Hotchkiss to watch two of my teammates, not me. Afterward the coach told me they might have a preferred walk-on spot for me, but if I had any other option, I should take that. Well, I didn’t have any other options. I went to Michigan even though they told me I could probably only practice with the team and I probably wouldn’t get to play in any games. Then, my freshman year, I ended up getting into quite a few games. Even at the end of the year, though, I remember talking to the coaches and they were talking about the next year. And I said, ‘Am I still on the team?’ After Michigan, I played in Toledo, Grand Rapids, then Detroit, and now I’m headed to Dallas.

What specific thing did you learn in East that has enabled you to be successful?
I’d say the value of hard work. My parents had instilled that in me from an early age, but I think it was reinforced at East. The other thing is the sense of community. I think that’s so important in East. I’ve always felt there were so many people in East who are there to support you. There have been many, many times over the years when I’ve had people tell me I couldn’t do something and there have always been people in East in my corner who believed that I could.

Did you have a favorite teacher or class?
There were so many great teachers. Mr. Tompkins for team games, BClay (Brian Clay), Mr. Farmer.

If you had to choose one moment in one location to serve as the signature moment of your East school experience, what would it be?
The location would be right by the Jimmy Gerken statue, standing there, by the corner of the football field, seeing the lake. I didn’t know Jimmy personally, but to me he just kind of embodies East Grand Rapids. I know his brother, Don Gerken, well and Don is the kind of person who will just do anything for you. It’s incredible, really. So that’s what I think of when I close my eyes and think of East Grand Rapids.

What do you know now that you wish you’d known then?
I wish I would’ve known not to take things so seriously. If you get a bad grade on a test or you get your feelings hurt or something doesn’t go the way you want it to go, you think it’s the end of the world because right then, that is your world. You don’t realize that there’s so much more that you’re going to experience. Those little things are opportunities to learn. They don’t need to bring your whole world crashing down.

What advice do you have for young East alums who are just starting out?
Whatever it is you’re doing, whether it’s college or a new job or whatever, pursue it to the best of your ability. Put your best foot forward and give it your best effort. Have a “get to” attitude, not a “have to” attitude. Enjoy what you’re doing. Too many people have the attitude that what they’re doing is an obligation and not an opportunity.

Who else would you like us to have a virtual cup of coffee with?
Tyler Oates ‘06.

Bonus question: What are you glad we didn’t ask you about?
My 91 Honda Accord that didn’t start on a hot day. I vividly remember having to park it in the shade at baseball practice so it would start after.