A Virtual Cup of Coffee with Richard Turke ‘88 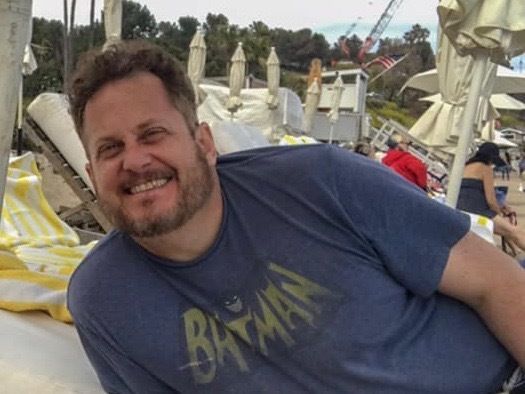 Richard Turke ‘88 has used many different media to express his creativity and natural storytelling ability. After leaving East Grand Rapids, he graduated from The California Institute of the Arts. Richard started in fine arts, where his artwork displayed a talent for telling a story and humor. Transitioning to film, he created several original short subjects, which continued to reflect his depth of story and humor. Richard's work has been featured in several prestigious film festivals, such as AFI, Sitges and Slamdance. Richard wrote and directed his first feature film, "Visible Scars,” which won the Best Picture Award at the Shockfest Film Festival in 2012 . His recent film, “Watch This,” was shot in Los Angeles with a cast including veteran actors Harrison Page and Donzaleigh Abernathy. This film won numerous awards and aired on CBS. Richard’s combined works show he is a natural storyteller with the ability to create interesting characters. His works are filled with humor, emotion and thought.

You can only have one: Rose’s caramel corn, an ice cream cone from Jersey Junction, or a Yesterdog. Which do you choose?
Oh yes, for sure Yesterdog. I try to go there every time I visit Grand Rapids. My family would often go there when I was a kid. Sitting on a stool, eating my hot dog, while looking at old comic strips from the 1930s and 40s. Good times. All of Yesterdog’s decor was pretty cool to look at and the hot dogs weren’t bad either.

What was your path from East Grand Rapids to where you are now in life?
I enjoyed growing up in East Grand Rapids. In high school, I was known as an artist and cartoonist.  Art really excited me. When it came time to pick a college, my art teacher, Mrs. Pollice, sent me to the library to look at colleges. We used books back then. This was before the internet. I only looked at art colleges that were listed as very difficult to get in. I always wanted to go to California and knew California Institute of the Arts was the school for me. I started out in fine art, then moved to Film/Character Animation. After Cal Arts, I had a few animation jobs here and there but nothing consistent. Finding freelance jobs in my early twenties was pretty difficult.

I was approached by someone at Michael J. Fox‘s company. He asked me if I had any ideas for live-action films. That is where my career shifted to live action. I still did independent animated films. Animated films that were in AFI and Slamdance and other notable festivals. One of the films was acquired by Warner Brothers.  I also explored live-action films. I produced a film at Scott Free (Ridley Scott’s Company). “Blade Runner” star Rutger Hauer was in our film. I wrote and directed an animated pilot that was shown on “Funny or Die.”  Then I got a big break. I wrote and directed a feature film. The film stars Tom Sizemore and the cinematographer was Jacques Haikin from “Nightmare on Elm Street” fame. I learned the most from Jacques. The film won best picture at the Shockfest film festival. Making films is like a drug. You want to keep going and improving to make new films.

Then in 2016, I did a film called ”Watch This.” It’s a drama about a father and daughter coping with the loss of their mother. That film was eventually shown on television. It was cool that Billy Ray Cyrus called me up to tell me how much he enjoyed the film. Lately, I’ve been writing a lot of scripts trying to get the next movie made. The industry is changing. We’re saturated with so much content. This industry is not easy. Not everyone succeeds. Even from their best efforts. I am grateful for what I’ve achieved so far.

In between films, I work in post production, which gives me a steady income. The entertainment business is unpredictable. A lot of ups and downs. I still love art. In my spare time, I try to find time to paint and draw.

What specific thing did you learn in East that has enabled you to be successful?
I learned that with a lot of hard work you can achieve your goals. I had a lot of support from students and teachers. That gave me confidence that I might not have had in myself. I’ll always appreciate that.

What were you like in school?
I was quiet and shy for the first few years in high school. I kept things to myself. Focused mainly on my art. I remember walking down the hallways in between classes. Students saying hello to me. I would have my head down not knowing what to say. It took students from class to bug me to go to the East football games. I would say no at first, But I eventually went. I made some great friends.

Did you have a favorite teacher or class?
Hands down, I would say my art teacher, Mrs. Pollice. She believed in me and saw potential. She introduced me to the work of artists Andrew Wyeth and Norman Rockwell. In my sophomore year, Mrs. Pollice told me I should learn art outside of high school. I enrolled in adult art classes at night. Then my junior year I enrolled at Chicago Art Institute. She was a huge supporter and challenged me to do more.

I also have fun memories in Mr. Brenner’s class. He was very entertaining. Learned a great deal from him. Most memorable was his admiration for Walden and Moby Dick. I remember our Walden exercise was writing in a journal while communing with nature.  He had a miniature iron cannon that he would point at a student if he/she would disrupt the class.

I wasn’t really good at math. I remember Mr. Sink spending that extra time with me. Always had a can-do attitude. He was attentive and patient with his students.

If you had to choose one moment in one location to serve as the signature moment of your East school experience, what would it be?
It would probably be a toss-up of going to the East football games (they were fun to go to and meet up with friends) and when I received the artist of the year award at the auditorium. Mr. Sink presented me with the award and my folks were there for support.

What do you know now that you wish you’d known then?
I wish I hadn’t been so shy and had taken more chances in activities that were outside my comfort zone.

Do you stay in touch with many people from East Grand Rapids?
I still reside in Los Angeles. It’s hard to keep in touch with people when you live so far away.  But when I do go back, I do reconnect with friends. I did reconnect with a lot of people from my 30th reunion. That was a great time. Took me back to high school. I still talk regularly to Brennan Ringlever and Matt Jordan. Matt and his family lived in Los Angeles for many years and have now moved back to East Grand Rapids. I know he loves to be back.

What advice do you have for young East alums who are just starting out?
To have a good balance. Work hard to achieve your goals, but don’t let it consume you.

Who else would you like us to have a virtual cup of coffee with?
Brendan Ringlever. He was known as Brenny back in high school. He lives in Lansing, Michigan with his wife and two boys. Brendan has 25 years of legislative and lobbying experience, which includes 12 years of service to the Michigan Legislature. He has held many top legislative posts, including top management positions within the highest levels of state government.  Brenny and I are different in a lot of ways, but his mom is an artist. So, he kind of gets me on that level.

Bonus question: What are you glad we didn’t ask you about?
There was a Cancun spring break trip senior year. A bunch of us decided to go to Daytona Beach, Florida instead. MTV did a Daytona beach live show that week. That was a crazy week.