A Virtual Cup of Coffee with Bill George '60 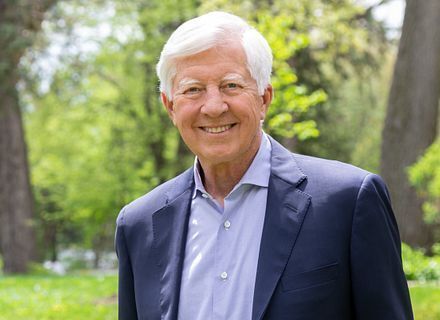 Bill George is executive fellow at Harvard Business School (HBS), where he has taught leadership since 2004. He is the author of: Emerging Leader Edition of True North, Discover Your True North and The Discover Your True North Fieldbook, Authentic Leadership, True North, Finding Your True North, 7 Lessons for Leading in Crisis and True North Groups. He has served as a director of Goldman Sachs, ExxonMobil, Novartis, Target, the Mayo Clinic, and World Economic Forum USA. He received the 2014 Bower Award for Business Leadership and was elected to the National Academy of Engineering in 2012. He has been named one of the Top 25 Business Leaders of the Past 25 Years by PBS, Executive of the Year by Academy of Management, and Director of the Year by National Association of Corporate Directors. He and his wife, Penny, reside in Minneapolis, Minnesota.

What was your path from East Grand Rapids to where you are now in life?
I came out of high school in the Sputnik era. The Russians had just launched Sputnik. So anyone who was better in math and science than they were in English was being encouraged to be an engineer. Well, that was definitely me, so I decided to be an engineer. The University of Michigan has an outstanding engineering program but I didn’t want to go to school with 45,000 other students and I wanted to see a different part of the country so I went to Georgia Tech.

After college I went right to Harvard Business School. So by the time I was 23 I had my MBA and I went to work for the defense department, first working for the CFO of the Department of Defense and then for the Secretary of the Navy. This was during Vietnam. Not a day went by when there wasn’t a protest on the National Mall. It took us a long time to learn the truth about that war.

In 1969, I went to work for Litton and soon became general manager of Litton Microwave Ovens. There weren’t any consumer microwave ovens in 1970. After Litton, I worked for Honeywell. I was president of Honeywell Europe and moved my young family to Brussels.

I was traveling a lot for Honeywell and it became clear to me that they were only interested in making money. I’d always wanted to be the head of a large company, but then I found a medium-sized company, Medtronic, that was led by a group of people who were focused on the mission of improving people’s health and their lives. I became CEO of Medtronic in 1991 and chairman of the board in 1996.

What specific thing did you learn in East that has enabled you to be successful?
I came to East in third grade. I don’t want this to sound like I’m bragging, but school was fairly easy for me. Our schools were great. College preparatory. Nearly everyone went to college. What I really learned in East was the value of athletics. I don’t remember a time when we weren’t playing sports. Football in the fall, basketball in the winter, spring break we’d be shoveling snow off the tennis courts. I learned the value of hard work, teamwork, being part of a team. We won the state championship in tennis. I learned a lot about life through athletics.

The other thing I learned in East Grand Rapids was good values. Having good values was a very big part of my life growing up. My mother always told me that she didn’t care if I got all A’s as long as I was a good person and had good values. That has stayed with me every day of my life.

What were you like in school?
I think people I went to school with would say I was a smart guy who was in too much of a hurry to get ahead. I wasn’t cool. I wasn’t a nerd, but I wasn’t cool either. My senior year I ran for class president and I lost by a margin of two to one. I had plenty of friends, but I hadn’t learned how to build relationships, which is what leadership is all about. Leadership isn’t something you’re born with. It’s something you learn by building relationships with people.

Did you have a favorite teacher or class?
Physics class with Mr. Wisz, for sure. He was a great teacher, helped me a lot with a science fair project. Math with Ma DeJonge. That’s what we called her, Ma DeJonge. My basketball coach, Mr. Kuta. I learned a lot from all of them.

If you had to choose one moment in one location to serve as the signature moment of your East school experience, what would it be?
My senior year, winning the Varsity Club award. I wasn’t the best athlete in my class, but it was a combination of athletics and academics. Coach Kuta presented the award. I was never a starter on the basketball team, but Coach Kuta said he’d never seen a kid work as hard as Bill George. That was a thrill for me, that all my hard work had paid off.

What do you know now that you wish you’d known then?
That leadership is all about building relationships. I wish I’d learned that earlier in life.

Do you stay in touch with many people from East Grand Rapids?
Not as many as I’d like. John Young, Dave Barrett, Dan Miller, Dave Frey.

What advice do you have for young East alums who are just starting out?
Life is long. Take time to figure out who you are and what you want to do with your life.

Who else would you like us to have a virtual cup of coffee with?
Dave Barrett. The best athlete in our class, an exceptional individual, outstanding physician.

Bonus question: What are you glad we didn’t ask you about?
I volunteered some of my disappointments on my own, so I guess there really isn’t anything I wouldn’t share with you.